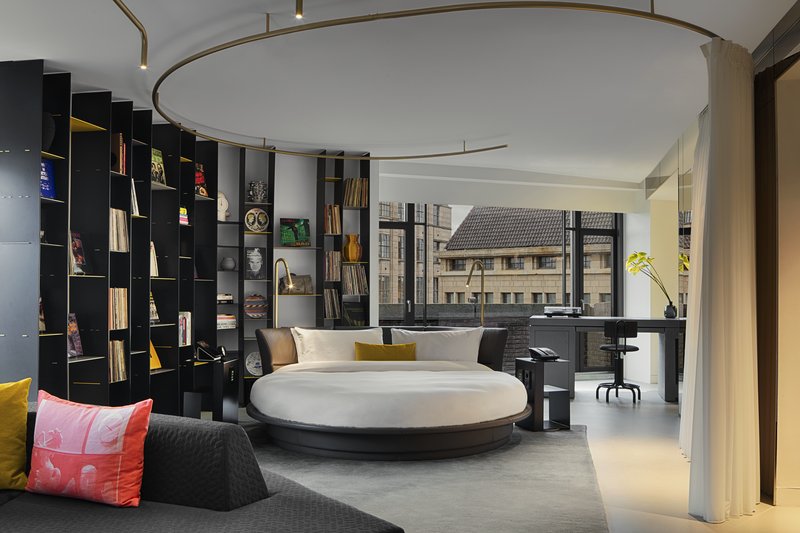 design et al are delighted to announce that W Amsterdam Hotel have been shortlisted for Hotel Over 200 Rooms Award in The International Hotel and Property Awards 2017.

Split across two unique buildings, a former telephone exchange building and a bank, W Amsterdam is an intriguing design mix of heritage and contemporary style where nights never end and the pulse is set high with a full calendar of exclusive W Happenings. Step inside W Amsterdam Exchange and go straight to the top and check in at the rooftop W Lounge. Experience the innovative design and luxury of our 238 stylish guestrooms, including 23 suites, three WOW suites and two lavish Extreme WOW Suites. The W mode of operation is a “narrative- driven design”. The designers are known as story-tellers, hence the affinity and synergy between their vision and W’s was only natural right from the start.

W stands out for being a design-led life style brand. It offers a unique mix of cutting-edge music, fashion and design. It is inspiring, iconic, innovative and influential and all of these qualities need to be synthesised into an experience entirely appropriate to its destination. So the locals play a major role in making it happen. This DNA is actually the brief. When the designers first started to explore the building’s heritage, they discovered photographs in the city’s archive that documented the building’s interior in past times, when it was home to the Telephone Exchange and Royal Dutch Post Building. They were inspired by the telephone wires and electricity lines that played an integral part in the building’s setting and decided to incorporate the brass tubes in the different spaces of the hotel.

Five kilometres of brass tubes were used as a recurring design element in the hotel. The tubes lead the guest’s throughout the building and create a dynamic dialogue with the spaces which they cross over and define. The brass tubes evoke movement, create surfaces and define spaces. The tubes also function as impressive light fixtures, as well as bottle holders and a sitting bench. ‘Two sides – one scene’ which refers to the two buildings with both their own style and design coming together in one scene. The city of Amsterdam and its people are the key inspiration for the design of the hotel.